You are here:
Narcolepsy is a chronic sleep disorder characterized by overwhelming daytime drowsiness and sudden attacks of sleep. People with narcolepsy often find it difficult to stay awake for long periods of time, regardless of the circumstances. 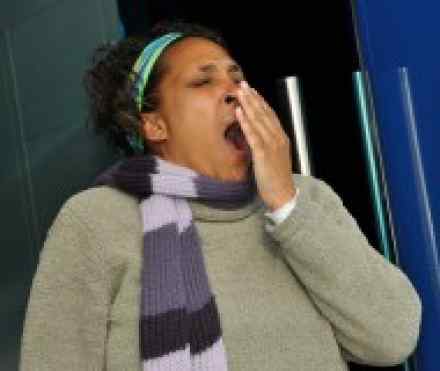 Narcolepsy is a chronic sleep disorder characterized by overwhelming daytime drowsiness and sudden attacks of sleep. People with narcolepsy often find it difficult to stay awake for long periods of time, regardless of the circumstances. Narcolepsy can cause serious disruptions in your daily routine.

Contrary to what some people believe, narcolepsy isn't related to depression, seizure disorders, fainting, simple lack of sleep or other conditions that may cause abnormal sleep patterns.

Narcolepsy is a chronic condition for which there's no cure. However, medications and lifestyle changes can help you manage the symptoms. Talking to others — family, friends, employer, teachers — can help you cope with narcolepsy.

Symptoms of narcolepsy may worsen for the first few years, and then continue for life. They include:

Some episodes of sleep attacks are brief, lasting seconds. Some people with narcolepsy experience automatic behavior during these brief episodes. For example, you may fall asleep while performing a task you normally perform, such as writing, typing or driving, and you continue to function while asleep. When you awaken, you can't remember what you did, and you probably didn't do it well. For instance, if you were writing, what you wrote asleep may look like scribbling.

The signs and symptoms of narcolepsy can begin anytime up to your 50s, but they most commonly begin between the ages of 10 and 25. Symptoms often are more severe for those who develop them early in life, rather than in adulthood.

The exact cause of narcolepsy isn't known. Genetics may play a role. Other factors, such as infection, stress or exposure to toxins, may contribute to the development of narcolepsy.

The normal process of falling asleep begins with a phase called non-rapid eye movement (NREM) sleep. During this phase, your brain waves slow considerably. After an hour or two of NREM sleep, your brain activity picks up again, and REM sleep begins. Most dreaming occurs during REM sleep.

In narcolepsy, however, you may suddenly enter into REM sleep without first experiencing NREM sleep, both at night and during the day. Some of the characteristics of REM sleep, such as sudden lack of muscle tone, sleep paralysis and vivid dreams, occur during other sleep stages in people with narcolepsy.

The role of brain chemicals

Hypocretin is an important chemical in your brain that helps regulate wakefulness and REM sleep. People with narcolepsy have low levels of this neurochemical in their spinal fluid. It's particularly low in those who experience cataplexy. Exactly what causes the loss of hypocretin-producing cells in the brain isn't known, but experts suspect it's due to an autoimmune reaction.

Public misunderstanding of the condition

Narcolepsy may cause serious problems for you professionally and personally. Others might see you as lazy, lethargic or rude. Your performance may suffer at school or work.

Extreme sleepiness may cause low sex drive or impotence, and people with narcolepsy may even fall asleep while having sex. The problems caused by sexual dysfunction can be further complicated by emotional difficulties. Intense feelings, such as anger or joy, can trigger some signs of narcolepsy such as cataplexy, causing affected people to withdraw from emotional interactions.

Sleep attacks may result in physical harm to people with narcolepsy. You're at increased risk of a car accident if you have an attack while driving. Your risk of cuts and burns is greater if you fall asleep while preparing food.

Your doctor may make a preliminary diagnosis of narcolepsy based on your excessive daytime sleepiness and sudden loss of muscle tone (cataplexy). After an initial diagnosis, your doctor may refer you to a sleep specialist for more evaluation.

Formal diagnosis may require staying overnight at a sleep centre, where you undergo an in-depth analysis of your sleep by a team of specialists. Methods of diagnosing narcolepsy and determining its severity include:

These tests can also help doctors rule out other possible causes of your signs and symptoms. Other sleep disorders, such as sleep apnea, can cause excessive daytime sleepiness.

Another test your doctor might recommend is a hypocretin test, which measures the levels of hypocretin in the fluid that surrounds your spinal cord. Most people with narcolepsy have low levels of this brain chemical that regulates REM sleep. A sample of your spinal fluid is obtained with a lumbar puncture (spinal tap), during which a needle is inserted into your lower spine to withdraw spinal fluid.