You are here:
Ovarian cysts are fluid-filled sacs or pockets within or on the surface of an ovary. The ovaries are two bilateral organs — each about the size and shape of an almond — located on each side of your uterus. 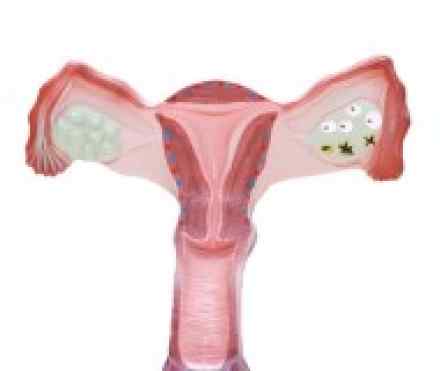 Ovarian cysts are fluid-filled sacs or pockets within or on the surface of an ovary. The ovaries are two bilateral organs — each about the size and shape of an almond — located on each side of your uterus. Eggs (ova) develop and mature in the ovaries and are released in monthly cycles during your childbearing years.

Many women have ovarian cysts at some time during their lives. Most ovarian cysts present little or no discomfort and are harmless. The majority of ovarian cysts disappear without treatment within a few months.

However, ovarian cysts — especially those that have ruptured — sometimes produce serious symptoms. The best way to protect your health is to know the symptoms and types of ovarian cysts that may signal a more significant problem, and to schedule regular pelvic examinations.

You can't depend on symptoms alone to tell you if you have an ovarian cyst. In fact, you'll likely have no symptoms at all. Or if you do, the symptoms may be similar to those of other conditions, such as endometriosis, pelvic inflammatory disease, ectopic pregnancy or ovarian cancer. Even appendicitis and diverticulitis can produce signs and symptoms that mimic a ruptured ovarian cyst.

Still, it's important to be watchful of any symptoms or changes in your body and to know which symptoms are serious. If you have an ovarian cyst, you may experience one or more of the following signs and symptoms:

Your ovaries normally grow cyst-like structures called follicles each month. Follicles produce the hormones oestrogen and progesterone and release an egg when you ovulate.

Sometimes a normal monthly follicle just keeps growing. When that happens, it becomes known as a functional cyst. This means it started during the normal function of your menstrual cycle. There are two types of functional cysts:

A large ovarian cyst can cause abdominal discomfort. If a large cyst presses on your bladder, you may feel the need to urinate more frequently because bladder capacity is reduced.

Some women develop less common types of cysts that may not produce symptoms, but that your doctor may find during a pelvic examination. Cystic ovarian masses that develop after menopause may be cancerous (malignant). These factors make regular pelvic examinations important.

The following types of cysts are much less common than functional cysts:

A cyst on your ovary may be found during a pelvic exam. If a cyst is suspected, doctors often advise further testing to determine its type and whether you need treatment.

Typically, doctors address several questions to determine a diagnosis and to aid in management decisions:

To identify the type of cyst, your doctor may perform the following procedures: