You are here:
Smallpox is a contagious, disfiguring and often deadly disease caused by the variola virus. Smallpox is believed to have been around for thousands of years. Few other illnesses have had such a devastating effect on human health and history. 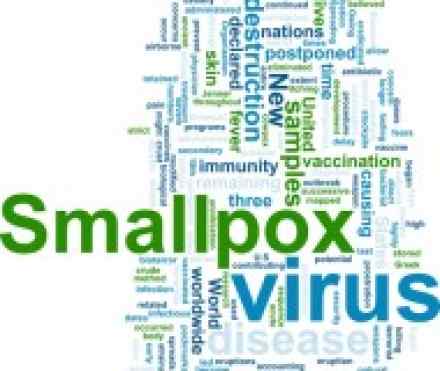 Smallpox is a contagious, disfiguring and often deadly disease caused by the variola virus. Smallpox is believed to have been around for thousands of years. Few other illnesses have had such a devastating effect on human health and history.

There's no treatment or cure for smallpox. The only prevention is vaccination.

Naturally occurring smallpox was eradicated worldwide by 1980 — the result of an unprecedented immunization campaign. However, interest in the disease remains high because stocks of smallpox virus, kept for research purposes, are stored in two high-security labs — one in the United States and one in Siberia. In addition, it's suspected that other governments or entities may hold stockpiles. This has lead to concerns that smallpox may be used as a biological warfare agent.

The first symptoms of smallpox usually appear 12 to 14 days after you're infected. During the incubation period of seven to 17 days, you look and feel healthy and can't infect others.

Following the incubation period, a sudden onset of flu-like signs and symptoms occurs. These include:

A few days later, the characteristic smallpox rash appears as flat, red spots (lesions). Within a day or two, many of these lesions turn into small blisters filled with clear fluid (vesicles) and later, with pus (pustules). The rash appears first on your face, hands and forearms, and later on your trunk. It's usually most noticeable on the palms of your hands and the soles of your feet. Lesions also develop in the mucous membranes of your nose and mouth. The distribution of lesions is a hallmark of smallpox and a primary way of diagnosing the disease.

When the pustules erupt, the skin doesn't break, but actually separates from its underlying layers. The pain can be excruciating. Scabs begin to form eight to nine days later and eventually fall off, leaving deep, pitted scars. All lesions in a given area progress at the same rate through these stages. People who don't recover usually die during the second week of illness.

In the past, smallpox was sometimes confused with chickenpox, a childhood infection that's seldom deadly. Yet chickenpox differs from smallpox in several important ways:

The variola virus causes smallpox. Once you're infected, the virus replicates inside your cells — first in the lymph nodes and then in your spleen and bone marrow. Eventually, the virus settles in the blood vessels in your skin and the mucous membranes of your nose and throat. When the lesions in your mouth slough off, large amounts of virus are released into your saliva. This is when you're most likely to transmit the disease to others.

Smallpox usually requires fairly prolonged face-to-face contact to spread. It's most often transmitted in air droplets when an infected person coughs, sneezes or talks. In rare instances, airborne virus may spread further, possibly through the ventilation system in a building, infecting people in other rooms or on other floors. Smallpox can also spread through contact with contaminated clothing and bedding, although the risk of infection from these sources is slight.

Although most people who get smallpox survive, variola major is fatal in about 30 percent of people who contract it. Almost no one survives the hemorrhagic and flat forms of the disease. People who recover from smallpox usually have severe scars, especially on the face, arms and legs. In some cases, smallpox may cause blindness.

Even a single confirmed case of smallpox would be considered an international health emergency. Based on symptoms and appearance of the rash, the Centers for Disease Control and Prevention (CDC) or a CDC Laboratory Response Network-designated variola testing laboratory can do definitive testing using a tissue sample taken from one of the lesions on the skin of the infected person.