You are here:
Concussions range in significance from minor to major, but they all share one common factor — they temporarily interfere with the way your brain works. They can affect memory, judgment, reflexes, speech, balance and coordination. 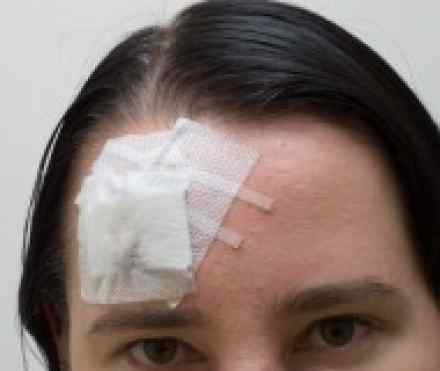 The signs and symptoms of a concussion can be subtle and may not be immediately apparent. Symptoms can last for days, weeks or even longer.

The two most common concussion symptoms are confusion and amnesia. The amnesia, which may or may not be preceded by a loss of consciousness, almost always involves the loss of memory of the impact that caused the concussion.

Signs and symptoms of a concussion may include:

Some symptoms of concussions are not apparent until hours or days later. They include:

Head trauma is very common in young children. But concussions can be difficult to recognize in infants and toddlers because they can't readily communicate how they feel. Nonverbal clues of a concussion may include:

Your brain has the consistency of gelatin. It's cushioned from everyday jolts and bumps by the cerebrospinal fluid that it floats in, inside your skull. A violent blow to your head can cause your brain to slide forcefully against the inner wall of your skull. Even the sudden stop of a car crash can bounce your brain off the inside of your skull. This can result in bleeding in or around your brain and the tearing of nerve fibers.

Any blow to the head can cause a concussion. Falls and traffic accidents often involve concussions, with or without other injuries. Without proper safety equipment and supervision, student athletes may be at increased risk of concussions when playing football and other contact sports.

Concussions don't always involve head impact. Sudden acceleration or deceleration of the head — resulting from events such as a car crash or, in babies, being violently shaken — can cause a concussion. And anyone who has had a concussion is at higher risk of having concussions in the future.

Postconcussion syndrome, a poorly understood complication, causes concussion symptoms to last for weeks or months. People who have had a concussion also double their risk of developing epilepsy within the first five years after the injury.

Diagnosing a concussion is usually straightforward. If a blow to your head has knocked you out or left you dazed, you've had a concussion. It's more difficult, however, to determine whether the blow has caused potentially serious bleeding or swelling in your skull. Signs and symptoms of these injuries may not appear until hours or days after the injury.

After your doctor asks detailed questions about your accident, he or she may perform a neurological exam. This evaluation includes checking your:

A computerized tomography (CT) scan is the standard test to assess postconcussion damage. A CT scanner takes multiple cross-sectional X-rays and combines all the resulting images to produce detailed, two-dimensional images of your skull and brain. During the procedure, you lie still on a table that slides through a large, doughnut-shaped X-ray machine. The scan is painless and generally takes less than 10 minutes.

Not every concussion requires a CT scan, but the test is usually done as a precaution if there's a chance your injury is more severe than your immediate condition suggests. You're more likely to need a scan if you:

You may need to be hospitalized overnight for observation after a concussion. If your doctor says it's OK for you to be observed at home, someone should check on you periodically for at least 24 hours. You may need to be awakened every two hours to make sure you can be roused to normal consciousness.

Rest is the best recovery technique. Healing takes time. For headaches, use Paracetamol. Don't take aspirin, ibuprofen and other nonsteroidal anti-inflammatory drugs (NSAIDs), as these medications can increase the risk of bleeding.

If you or your child sustained a concussion while playing competitive sports, ask your doctor or your child's sideline doctor when it is safe to return to play. Resuming sports too soon increases the risk of a second concussion and of lasting, potentially fatal brain injury.

The following tips may help you to prevent or minimize your risk of head injury: