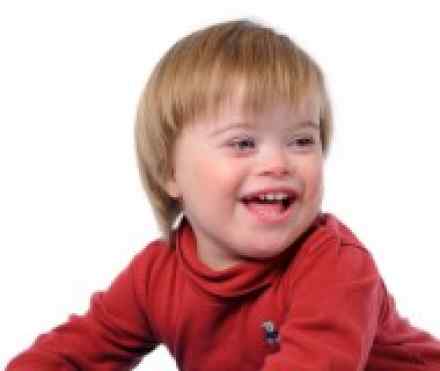 Children with Down syndrome may also have:

Human cells normally contain 23 pairs of chromosomes. One chromosome in each pair comes from your father, the other from your mother.

There are no known behavioral or environmental factors that cause Down syndrome.

Most cases of Down syndrome aren't inherited. They're caused by a mistake in cell division during the development of the egg, sperm or embryo.

Translocation Down syndrome is the only form of the disorder that can be passed from parent to child. However, only about 4 percent of children with Down syndrome have translocation. And only about half of these cases are inherited from one of the parents.

The chance of passing on the translocation depends on the sex of the parent who carries the rearranged chromosome 21:

Some parents have a greater risk of having a baby with Down syndrome. Risk factors include:

Children with Down syndrome can have a variety of complications, including:

Screening for Down syndrome is offered as a routine part of prenatal care. A mother's age has traditionally been a factor in the decision to screen for Down syndrome. But now, the American College of Obstetricians and Gynecologists recommends offering various screening tests for Down syndrome to all pregnant women, regardless of age. Your health care provider can help you weigh the pros and cons of these tests for you.

Various screening tests can help identify whether you have a high risk of carrying a baby with Down syndrome. Blood tests typically have been offered around the 16th week of pregnancy to screen for Down syndrome, spina bifida and various other chromosomal disorders.

If early assessment isn't your first priority, you can have full integrated testing, which is done in two parts during the first two trimesters of your pregnancy. The results of the two parts are combined to estimate your risk that your baby has Down syndrome. Only about 1 percent of women have a false-positive result with full integrated testing, so fewer women require more invasive testing.

If a screening test indicates a high risk of Down syndrome, a more invasive test may be used to determine whether your baby actually has Down syndrome.

If your screening tests are positive or worrisome or you're at high risk of having a baby with Down syndrome, you might consider further testing to confirm the diagnosis. Diagnostic tests that can identify Down syndrome include:

Each of these three tests is 98 to 99 percent accurate in diagnosing Down syndrome before birth.

Early intervention for infants and children with Down syndrome can make a difference in realizing their potential abilities and in their quality of life.

Ask your doctor about early intervention programs in your area. These specialized programs — in which children with Down syndrome are stimulated at an early age with appropriate sensory, motor and cognitive activities.

Programs vary from location to location, but they usually involve therapists and special educators whose goal is to help your baby develop motor skills, language, social skills and self-help skills.

If your child has Down syndrome, you'll likely build a team of specialists that, depending on your child's particular needs, will provide your child's medical care and help him or her develop skills as fully as possible. In addition to your primary care pediatrician, your team may include:

A genetic counselor can help you understand your chances of having a child with Down syndrome. He or she can also explain the prenatal tests you will be offered and help you figure out the pros and cons of testing for you.

When you learn your child has Down syndrome, you may experience a gamut of emotions, including anger, fear, worry, sorrow and guilt. You may not know what to expect, and you may worry about your ability to care for a baby with a disability. The best antidote for fear and worry is information and support. Prepare yourself: