You are here:
Hives — also known as urticaria — are raised, red, itchy welts (wheals, or swellings) of various sizes that seem to appear and disappear on your skin. Angioedema, a type of swelling, causes large welts deeper in your skin, especially near your eyes and lips. 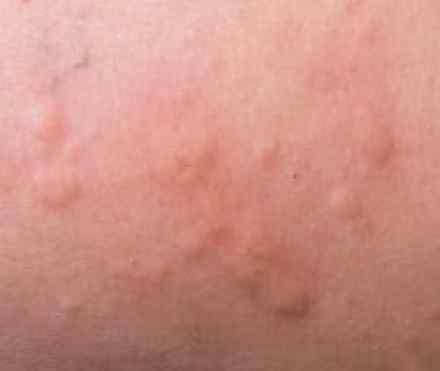 Signs and symptoms of hives include:

Hives can be either acute or chronic. By definition, acute hives can last from less than a day to up to six weeks, whereas chronic hives last more than six weeks — sometimes occurring for months to years at a time.

Angioedema is similar to hives but occurs deeper in the skin. Signs and symptoms of angioedema include:

Angioedema often appears near your eyes or lips, but can also develop on your hands, feet, genitalia or inside your throat. Angioedema and hives can occur separately or at the same time.

Allergic reactions to medications or foods can cause acute hives or angioedema. Many allergens have been identified. Examples include:

Additional triggers that may produce hives or angioedema include:

In addition to these triggers, hives and angioedema sometimes occur in response to your body's production of antibodies. This may occur because of blood transfusions; immune system disorders, such as lupus or cancer; certain thyroid disorders; infections, such as hepatitis; or even a cold.

Hereditary angioedema is an inherited form of angioedema and is related to low levels or abnormal functioning of certain blood proteins (C1 inhibitors). These inhibitors play a role in regulating how your immune system functions.

You may be at greater risk of hives and angioedema if you:

Hives and angioedema can cause:

In more serious cases — such as when swelling occurs inside your mouth or throat — complications can include:

Anaphylactic shock (anaphylaxis) is a serious allergic reaction involving your heart or lungs. Your bronchial tubes narrow, it's difficult to breathe, and your blood pressure drops, causing dizziness and perhaps loss of consciousness or even death. Anaphylactic shock occurs rapidly, and requires immediate medical care.

Your doctor will begin by asking you about your medical history. This may include asking you to create a detailed diary of exposure to possible irritants. It's important to tell your doctor about all medications you take, including over-the-counter (nonprescription) drugs and herbal remedies, even if you don't take them every day.

If the cause of your hives or angioedema isn't apparent or if your symptoms recur often, your doctor may recommend an allergy skin test.

If your doctor suspects hereditary angioedema, he or she may ask for blood tests to check for levels and function of specific blood proteins.