You are here:
Measles is a common childhood disease that now can be prevented with a vaccine. Signs and symptoms of measles include cough, runny nose, inflamed eyes, sore throat, fever and a red, blotchy skin rash. 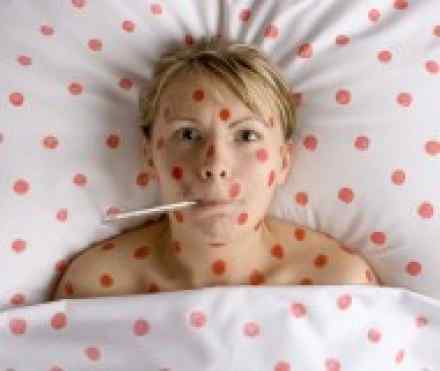 Measles is a common childhood disease that now can be prevented with a vaccine. Signs and symptoms of measles include cough, runny nose, inflamed eyes, sore throat, fever and a red, blotchy skin rash.

Also called rubeola, measles can be serious and even fatal for small children. While death rates have been falling worldwide as more children receive the measles vaccine, the disease still kills several hundred thousand people a year, most under the age of 5.

Measles symptoms and signs appear 10 to 12 days after exposure to the virus. They typically include:

The course of the measles virus

Measles typically begins with a mild to moderate fever, accompanied by other signs and symptoms, such as a persistent cough, runny nose, inflamed eyes (conjunctivitis) and sore throat. Two or three days later, Koplik's spots — a characteristic sign of measles — appear. Then a fever spikes, often as high as 104 or 105 °F (40 or 40.6 °C). At the same time, a red blotchy rash appears, usually on the face, along the hairline and behind the ears. This slightly itchy rash rapidly spreads downward to the chest and back and, finally, to the thighs and feet. After about a week, the rash fades in the same sequence that it appeared.

When someone with measles coughs, sneezes or talks, infected droplets spray into the air, where other people can inhale them. The infected droplets may also land on a surface, where they remain active and contagious for several hours. You can contract the virus by putting your fingers in your mouth or nose or rubbing your eyes after touching the infected surface.

Most people recover from measles in 10 to 14 days. As many as 20 percent will develop complications, which may include:

Your doctor can usually diagnose measles based on the disease's characteristic rash as well as the small, bright red spots with bluish-white centers on the inside lining of the cheek, called Koplik's spots. If necessary, a blood test can confirm whether the rash is truly measles.