You are here:
Sudden cardiac arrest is the sudden, unexpected loss of heart function, breathing and consciousness. Sudden cardiac arrest usually results from an electrical disturbance in your heart that disrupts its pumping action and causes blood to stop flowing to the rest of your body. 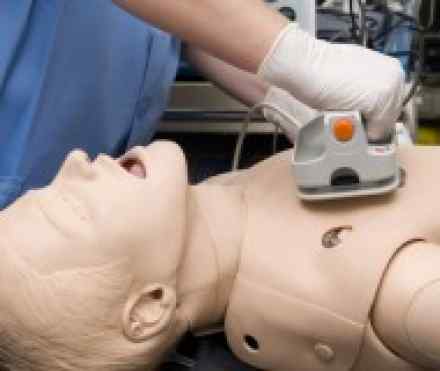 Sudden cardiac arrest is the sudden, unexpected loss of heart function, breathing and consciousness. Sudden cardiac arrest usually results from an electrical disturbance in your heart that disrupts its pumping action and causes blood to stop flowing to the rest of your body.

Sudden cardiac arrest is a medical emergency. If not treated immediately, it is fatal, resulting in sudden cardiac death. With fast, appropriate medical care, survival is possible. Administering cardiopulmonary resuscitation (CPR) — or even just rapid compressions to the chest — can improve the chances of survival until emergency personnel arrive.

The immediate cause of sudden cardiac arrest is usually an abnormality in your heart rhythm (arrhythmia), the result of a malfunction in your heart's electrical system.

If something goes wrong with the sinus node or the flow of electric impulses through your heart, an arrhythmia can result, causing your heart to beat too fast, too slow or in an irregular fashion. Often, these interruptions in rhythm are momentary and harmless. But some types of arrhythmia can be serious and lead to a sudden stop in heart function (sudden cardiac arrest).

The most common cause of cardiac arrest is an arrhythmia called ventricular fibrillation — when rapid, erratic electrical impulses cause your ventricles to quiver uselessly instead of pumping blood. Without an effective heartbeat, your blood pressure plummets, cutting off blood supply to your vital organs.

Most of the time, cardiac-arrest-inducing arrhythmias don't occur on their own. In a person with a normal, healthy heart, a sustained arrhythmia is unlikely to develop without some outside trigger, such as an electrical shock, the use of illegal drugs, or trauma to the chest at just the wrong time of the heart's cycle (commotio cordis).

Heart conditions that can lead to sudden cardiac arrest

More often, a life-threatening arrhythmia develops in a person with a pre-existing heart condition, such as:

Other factors that may increase your risk of sudden cardiac arrest include:

When sudden cardiac arrest occurs, your brain is the first part of your body to suffer because, unlike other organs, it doesn't have a reserve of oxygen-rich blood. It's completely dependent on an uninterrupted supply of blood. Reduced blood flow to your brain causes unconsciousness.

If your heart rhythm doesn't rapidly return to its normal rhythm, brain damage occurs and death results. If sudden cardiac arrest lasts more than 10 minutes, the survival rate is less than 5 percent. Survivors of cardiac arrest may show signs of brain damage.

If you experience an episode of sudden cardiac arrest without warning and survive, your doctor will want to investigate what caused the cardiac arrest. Identifying the underlying problem may help prevent future episodes of cardiac arrest.

Tests your doctor may recommend include:

A test commonly given after cardiac arrest is an electrocardiogram (ECG). During an ECG, sensors (electrodes) that can detect the electrical activity of your heart are attached to your chest and sometimes to your limbs. An ECG measures the timing and duration of each electrical phase in your heartbeat and can reveal disturbances in heart rhythm. Because injured heart muscle doesn't conduct electrical impulses normally, the ECG may show that a heart attack has occurred.

Blood tests may include:

Other tests that are often done include: